When chef Mattias Roock discovered a huge paella pan in the cellar of the Castello del Sole, he quickly created a dish to suit it: Paella Ticinese.
And Susana Caneja, Chef de Partie Poissonnier, knows the most important ingredients:
white wine and plenty of patience.

The kitchen of the Castello del Sole mainly cooks food that is cultivated in its own gardens. This is hardly surprising. After all the grounds are extensive: in addition to the 11 hectares of park surrounding the luxury hotel in Ascona,it also includes the Terreni alla Maggia estate with 150 hectares of land, where wines, vegetables, fruits, herbs and different maize varieties for polenta are grown. And, uniquely to Switzerland, risotto rice. “You won’t find the plants standing in flooded fields in Ascona, like you do in Asia or the Po Valley in Italy”, says the chef. “Loto”, as the rice variety is called, is grown dry and is similar to local grain.

Susana Caneja stirs a large saucepan. The bouillon, or the brodo, as it is called in Ticino, has been simmering on a low flame for hours. She tries some and nods with satisfaction: “Patience is a virtue when cooking. The better the brodo, the better the paella later”, says the 25-year-old from Portugal, adding with a smile: “There is another tip, but it comes right at the end.” She should know. As Chef de Partie Poissonier, Susana Caneja is responsible for the Spanish evening where the Ticinese paella is served once a week during summer months.

The giant pan the young cook uses to prepare the dish in front of guests the following evening measures an impressive 80 cm in diameter. For once, she is not standing at the stove in the gourmet kitchen, but in the garden at the Castello del Sole. “The very special thing about our recipe? We use our own risotto rice. In addition, we use rabbit from the Blenio valley and guinea fowl from the Magadino plain. The beautiful yellow colour comes from the saffron which grows in our herb garden.” She suddenly stops moving mid-sentence. The ladle scrapes over a light crust that has formed on the bottom of the pan. Some guests look puzzled. But Susana Caneja smiles: “Don’t worry, this is completely normal. Only then does the Ticinese paella develop its unique taste. Buon appetito!” Anina Rether 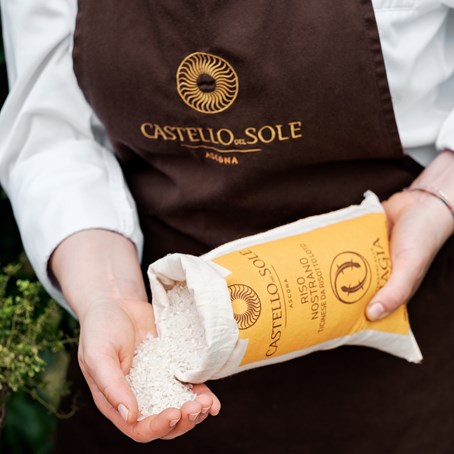 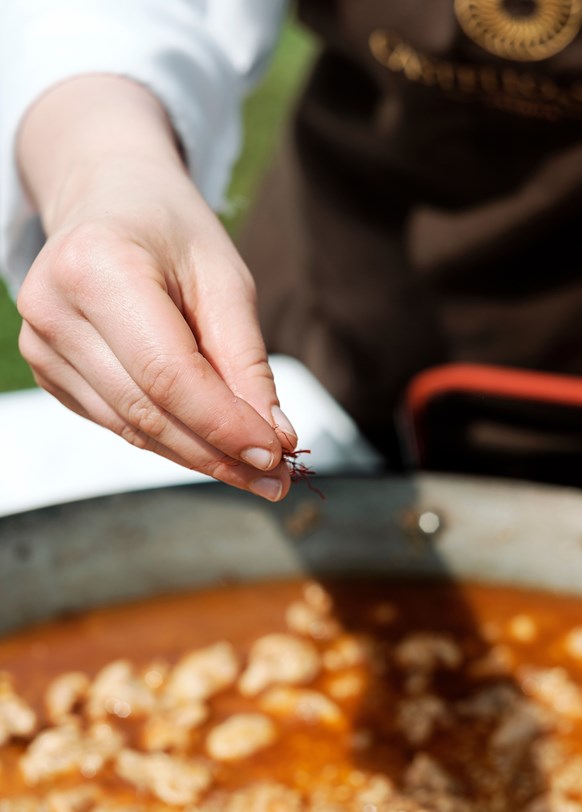 Quarter the courgettes, season and sauté in olive oil. Season the peppers and bake in olive oil in the oven at 220° for about 12 minutes. Peel off the skin, cut into rough pieces. Cut the fowl and rabbit into same-size pieces, season with salt and pepper, fry well in the paella pan and remove. Add the remaining olive oil and sauté the onion and garlic. Add the rice and simmer until it turns glassy. Now add saffron / paprika and tomato sauce, mix well and add with one litre of poultry / rabbit stock. Cook the paella on a low heat, stirring occasionally. Add the fried meat and top up with stock if necessary.

Shortly before the paella is ready, add the courgettes and peppers as a garnish and cook through.

We are the first agricultural company to cultivate one hundred percent Swiss rice. We work with dry cultivation: the plants are only watered by spraying when necessary. This saves water and has ensured the unmistakable taste of our risotto for over 20 years. The fields are located near a nature reserve on Lake Maggiore.

Mattias Roock, chef at the 5* Hotel Castello del Sole, is "Mister Farm to table" according to GaultMillau Switzerland. He takes the best from the hotel's own garden and the associated estate "Terreni alla Maggia" and uses it to create, among other things, the 5-course menu "Sapori del nostro orto", which means "the taste from our garden".