Fredi Nussbaum, head chef at the Storchen, has conquered the hearts of fish lovers in Zurich. The pike dinner served to the members of the boatmen’s guild every year at the end of the Sechseläuten spring festival has made him a household name and earned him a place in the guild’s annals. It takes a lot of skill to turn a pike into a culinary delight.

Two pikes with gaping mouths hang resplendent from a long pole. Each of these magnificent specimens is more than a metre long and easily weighs 10 kilos. The king of the predators is an impressive sight with its stunningly patterned scales. “Are they real?” Visitors at the Sechseläuten, the traditional spring festival of the guilds that takes place in Zurich once a year at the end of April, gaze in amazement. The pikes are naturally also a popular subject for selfies. Its strength and beauty make the pike a perfect figurehead for the boatmen’s guild. In mid-April, the fish emerge from the depths of Lake Zurich to search for a place to spawn in the shallower zones nearer the lakeshore. This is a perfect opportunity for the fishermen of Lake Zurich to cast out their nets. The head chef is also happy: At this time of year the fish are nice and lean.

Adrian Gerny, an angler from Wollishofen, guts the fish and arranges them on a long wooden pole. Decorated with flowers, they make a fine impression. They bide their time in the cold store at Storchen Zurich, where the boatmen’s guild has had its headquarters for many years, waiting for the moment when they will make their appearance at the Sechseläuten.

A smaller pike takes to the street during the children’s procession every year on Sunday, while on Monday the two larger specimens steal the show from many a celebrity at the parade. For the members of the boatmen’s guild, these predatory fish are the symbol of their profession. The guild of boatmen, carters and porters was founded in 1336 and now has 125 members, including apprentice guildsmen who must be at least 16 years old but are not yet full members.

At 2.30 in the afternoon, following the guild’s dinner with highranking guests of honour, the pikes make their entrance in front of the Storchen. A crowd of more than 200 onlookers on Weinplatz square stare at the fish in wonder. It’s time for the procession to head off to the waiting area, up the steep hill to the square at Lindenhof and down again to the Urania observatory and the popular shopping street Bahnhofstrasse. The pikes are carried by two apprentice guildsmen, who already have beads of sweat glistening on their foreheads. Their traditional uniforms and felt hats are not exactly light attire. At 3 pm, the head of the procession gives the last orders, and finally, at 3.30, they’re off: The pikes embark on their final journey through Zurich and along the Limmat.

After a good hour, the pike-bearers cut short the tour and leave the procession
to return the pikes to the cold store. After all, these magnificent fish are not only
symbolic figures at the procession — they will be served two days later at the pike
dinner that marks the culmination of the Sechseläuten festival. The pike dinner
dates back to the late 19th century, when fish evenings were organised.

The guild held its first pike dinner on 21 April 1920. The fish were a gift from fish-
mongers and from Valentin Lichtlen, a member of the guild. His descendants have
remained true to the custom and still provide the fish today.

Cyrille Anizan, chef de cuisine at the La Rôtisserie in the Storchen, is already waiting in front of the hotel. He leads the bearers along the winding steps to the kitchen, where Fredi Nussbaum is ready, fileting knives sharpened: Deftly and vigorously, the head chef prepares the fish with precise cuts. “Pike have what are called y-bones”, Fredi Nussbaum explains. Even now, the fish seems to be resisting as it creaks and cracks under the blade. 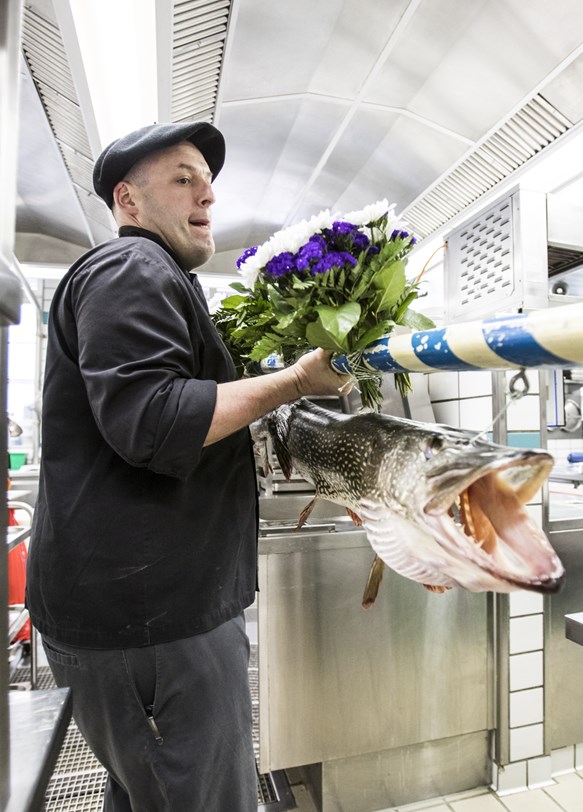 Preparations for the guild’s grand finale have begun. Fredi Nussbaum and his team will spend the next two days whipping up a pike dinner that has earned him a special place in the hearts of the guild’s members. “The quenelles of pureed pike blended with cream, diced pike baked in beer batter, and fried filet strips are a treat for the palate,” says guild master Peter Neuenschwander enthusiastically. But in fact, the pike dinner is just a small taste of the unbelievably diverse and delicious fish buffet served at the traditional fish dinner in January. Thanks to Fredi Nussbaum, this highlight is considered one of the most important culinary events in the calendar of Zurich’s guilds.
Dominik Joos

Blend the pike with cream, salt and some Noilly Prat (vermouth) to create a farce and form quenelles.

Steam the fresh spinach with butter and chopped shallots.

Roughly chop seasonal vegetables such as green asparagus, courgette and red pepper, and cook until crisp.

Dice the potato and bake in the oven with olive oil and butter.

Arrange the dish and drizzle with veal jus.